The NUEA scholarships were created by certified staff in District 203 through their union to recognize outstanding contributions among area high school seniors.  The Future in Education Award was added this year to help support a collegiate student entering the field of education.  The scholarships are funded by member dues and represent a small portion of the local support provided to the community through scholarships, volunteerism, and charitable giving.

Evie also contributed to several activities at Wheaton North High School.  She was the lead in her sophomore year One Act Play, and she dedicated time to Amnesty International during her junior and senior years.  She worked as a math resource tutor for three years.  Outside of school, Evie volunteered for the Salvation Army and the VFW while gathering work experience as a swim instructor.  Evie believes that participating in so many activities significantly helped her with her time management skills heading into college.

Colin Iverson – Colin will be attending the Bowling Green State University this fall as an intervention specialist for special education students in a K-12 setting.  Colin will also be playing soccer for Boling Green, which is a result of his demanding and highly successful athletic career at Naperville North High School.  In addition to playing volleyball as a freshman, Colin played soccer for NNHS for all four years, serving as varsity captain junior and senior year.  He also played soccer for the Galaxy Soccer Club, serving as captain for four years.

As a volunteer, Colin was an adapted PE and art leader, helping students with special needs access PE and art to their best ability.  He also participated on the J. Kyle Braid Leadership Foundation, which is a community service leadership group.  He similarly served as a DuPage Valley Special Athletes Peer, organizing special events for athletes with disabilities.  Furthermore, Colin was a Chicago Fire United Soccer Peer, helping special athletes perform soccer at a professional level.  Colin claims that his work with students and athletes with special needs has inspired him to become a special education teacher.

Jillian Paladino – Jillian will be attending Grinnell College in Grinnell, Iowa, where she will major in biochemistry.  She has excelled in both academics and athletics as a student at Downers Grove South High School.  She participated as a member of the Student Council, serving as President during her senior year.  She was also a member of Athletes Committed to Excellence, National Honors Society, Spanish Honors Society, Friendship Club, Math Club, Snowball, STRIVE, SAALT, and SALC.

Jillian balanced her school activities with volunteer work for her community.  She has volunteered frequently for both the DuPagePads and the Humane Society.  She will be a camp counselor at the Phantom Lake YMCA camp this summer, for which she has been training as a volunteer CIT for four years.  Jillian believes that her work as a volunteer has inspired her to someday work in the pediatric medical field so that she can continue to help children in a meaningful capacity.

Alexis Henz – Alexis is the first recipient of the NUEA Future in Education Scholarship.  She is currently attending North Central College with a major in Elementary Education and a minor in Psychology.  Alexis credits her K-12 education for providing her with critical leadership skills, organizational skills, and reliability skills.  One example of her leadership skills is her willingness to speak up in large groups, thereby accepting risk-taking as a critically important part of the learning process.

Alexis also recognizes the benefits of participating in Cross Country as a college athlete, particularly in a leadership role, occasionally leading the warm-ups or helping other athletes with their workout.  She states that one of the most satisfying rewards of teaching is learning with students.  She has wanted to become a teacher since she was young, deriving inspiration from her family members and from her passion to make an impact in the lives of her students.

From now on, all exec board members will have a dedicated e-mail account for NUEA business.  Please use the following addresses when communicating with the exec board:

Il Policy Institute recently gave an interview concerning Janus and state worker pensions, where there was little truth behind the statements made.  View IEA’s response below: 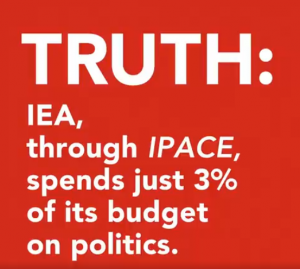 We are educators, parents, and community members. We are deeply committed to ensuring every student has the opportunity to succeed regardless of ZIP code.

Together, we will advocate for the resources students need to succeed, including up-to-date textbooks, desks and chairs that aren’t broken, the latest technology, and adequate school buildings.

Take the #RedForEd Pledge. Add your name to show your support for great public schools.

The NUEA scholarships were created by certified staff in District 203 through their union to recognize outstanding contributions among area high school seniors.  The scholarships are funded by member dues and represent a small portion of the local support NUEA provides the community through scholarships, volunteerism, and charitable giving.

Edward Forsythe – Edward Forsythe will be attending the University of Iowa this fall as a marketing major within the Tippie College of Business.  While at Metea Valley High School, Edward enrolled in a schedule packed with Advanced Placement and honors courses, including AP history, AP psychology, and Honors English.  His demanding workload was supplemented by an equally demanding athletic regimen.  Edward played soccer for two years and volleyball for four years at Metea.  He also played club volleyball and participated on the Student Athlete Leadership Team and Principal’s Advisory Board.

Outside of school, Edward was a valuable contributor to his community.  He participated in the St. Thomas Religious Education program until his sophomore year, when he transitioned into the St. Thomas Retreat Team for the next three years.  He also was employed as a lifeguard and swim coach while volunteering for the Metea Valley Healing Field Construction team and Feed My Starving Children.

Esther Park – Esther Park will be attending Calvin College in Grand Rapids, Michigan, where she will major in biology.  Esther has been active at Naperville Central High School as a musician, athlete, volunteer, and academic.  As an avid cello and piano player, Esther attributes her academic persistence to her musical experience, stating, “Music has trained me with the resilience necessary for achievement.”  Her resilience has manifested itself in four years of Bella Corda, and two years in the Tri-M Music Honorary and the Cello Choir.

Esther has also participated in Cross Country and Track for three years.  She has volunteered for several health-related events and organizations, citing inspiration from her dentist, a volunteer who has practiced in high-poverty areas such as Addis Ababa, Ethiopia.  She holds several part-time jobs, including nannying and delivering private music lessons.  All the while, Esther is a member of the National Honors Society.

Anna Southon – This fall, Anna Southon will be attending the University of Michigan with a major in political science.  Anna’s extra-curricular activities at Naperville Central High School reflect a strong desire to make her school a welcoming and nurturing environment.  Anna was elected as a Class Council Member for three years, and she participated in the NCHS Community Leadership Workshop, the Red Rage Spirit Club, and a LINK crew member, which helps facilitate a smooth transition for incoming 8th graders into high school.  Notably, Anna was a Sensory PE Peer Mentor, working closely to help a student with autism assimilate within the school environment.

Anna balanced academics with athletics with skill.  On one hand, she was a member of the Spanish Honor Society, National Honor Society, a National Merit Finalist, and an Illinois State Scholar.  On the other hand, she played soccer as a Freshman and she was a member of the Cross Country and Track teams for all four years of high school.  She was also a volunteer camp counselor for the Girl Scouts at Camp Greenewood in Lisle and she was a soccer referee for the Naperville Park District.  She completed both activities during all four years of her high school career. 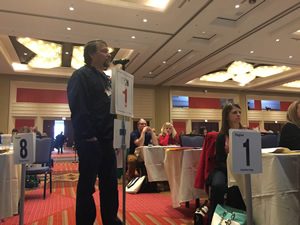 Rob Hunt (LJHS) speaks to the delegation regarding a pending bill. 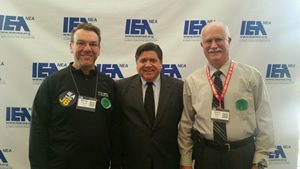 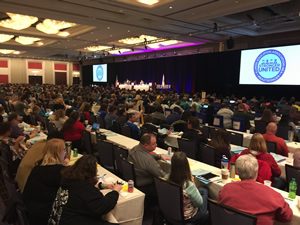 The hall is packed with delegates from all 70 regions within the IEA.  Naperville is represented by Region 39.

Ed was a tireless advocate for Naperville teachers and students, serving in the NUEA and the IEA for many years.  He was mayor of Bolingbrook from 1981 to 1985, and he was a science teacher at Naperville North High School.  He also coached the NNHS girl’s golf team and was inducted into the Illinois Coaches Association Golf Hall of Fame in 1995.

s an integral part of the NUEA, serving on the negotiating team for several contracts.  Ed was always fair and never accepted less than anyone’s best effort.  He was quick to celebrate the successes in life.  He helped lay the foundation for the benefits and working conditions that Naperville teachers currently enjoy.  We are forever indebted to Ed for his vision and his tenacity on our behalf.  Thank you, Ed.

A service will be held on Tuesday, December 26, at 12 Noon at Chicago Jewish Funerals, 195 North Buffalo Grove Rd (one block North of Lake Cook Rd.), Buffalo Grove, 60089.  In lieu of flowers, memorial contributions may be made to the Illinois Junior Golf Association, www.ijga.org

NUEA works hard to ensure that every child in District 203 gets a high quality education by supporting certified staff members, students, and community members in Naperville.

NUEA is a supporter of the Naperville Education Foundation and other charitable organizations that strengthen our community. NUEA also offers three scholarships in the spring to help better prepare students for the financial needs of college life.

We are also actively pursuing the implementation of an innovative professional development model that will keep our teachers on the cutting edge of best-practice research.

Many of our 1200+ members live, shop, dine, and play in Naperville, Bolingbrook, and Lisle, and we have a vested interest in helping our community to thrive. If you would like to partner with the NUEA on a business or service initiative, please contact President Mark Bailey.