New events are happening all the time.  Stay posted for information on IEA activity in the fall of 2021.

NUEA and IEA are hosing an important presentation on student discipline.  “Last year, a new Illinois law required school districts to revise their practices regarding out of school suspensions and expulsions. This presentation provides the context for why the law was passed, dispels common misconceptions about the law, and offers a roadmap for local associations and districts to apply the law in ways that should improve learning and working conditions throughout your district and in your classroom.” 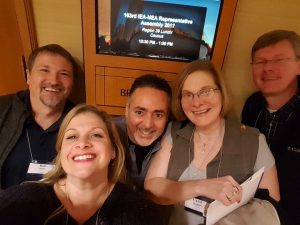 Know the Truth! – Check out the independent, Pulitzer Prize-winning website Politifact.  The site performs fact-checking on candidate statements, advertising, and the debates, line-by-line.

All IEA Members: Please check out this local voter’s guide to help you select education-friendly candidates!  Just enter your address and you’ll get a list of recommended candidates!

NUEA at the Local Leadership Kickoff – NUEA members enjoyed a presentation by Illinois State Senator Jennifer Bertino-Tarrant at the IEA Local Leadership Kickoff on August 2.  Pictured are NUEA members Kristyn Hudson (Scott), Taylor Alperin (Maplebrook), Sen. Bertino-Tarrant, and Amy Topmiller (Madison).  Sen. Bertino-Tarrant represents a large portion of Will County, and is a member of the Committee on School Funding Reform.  She spoke about her vision for ensuring equal opportunities for all students, regardless of where they live.

Should Public Unions be allowed to Collectively Bargain?  Gov. Rauner claims that public unions should not be able to collectively bargain because they are bargaining against the interests of the taxpayers.

Rauner’s Viewpoint: Public unions demand inflated salaries and luxurious working conditions, which artificially raise the cost of doing public and private business.  These unions also use their power to influence lawmakers, who pass bills favorable to public unions, and pass budgets unfavorable to businesses.  They are the reason our state is broke, and they are the reason businesses continue to leave our state.

But public unions are failing.  Undergraduate teacher prep programs has been steadily declining–down from 7% to 5% since 2010 ( Summer 2015 NEA Today, p. 22).  Compensation packages are well below the average package of private sector workers with similar educational levels.  Clearly, unions are not negotiating extravagant contracts.  Furthermore, contracts are mutually agreed upon by School Boards, who represent the taxpayers.  This is a balanced system of accountability on all sides.

Collective bargaining helps maintain a high quality workforce by incentivizing talented individuals to enter the profession.  It provides for due process, for safe working conditions, and for reasonable compensation.  The number of strikes actually declined when collective bargaining was introduced in Illinois in 1975.

And the influence of NEA lobbyists is actually quite small.  IEA makes up less than 2% of total campaign contributions, according to ChicagoBusiness.com.

Public unions are not the reason Illinois is broke.  Unequal and unfair taxation is.

To put it another way…if teachers are not allowed to negotiate a fair wage because they bargain against the interests of the taxpayers, then the same argument should prevent state and local governments from rejecting valuable tax revenue from every WalMart store in the state.

Government entities formulate budgets based on a balance between anticipated revenue and expenditures.  Included in these budgets are long-term forecasts of population trends.  Pension payment plans and annual budgets rely heavily on these forecasts.  By waiving the tax liabilities for 66% of Illinois corporations, Illinois has destroyed the base of revenue that makes the short- and long-term budget formulas work.

This is a critical reason why Illinois is struggling with its budget obligations.  It is not because teachers’ pensions or compensation packages are extravagant.  Teachers’ pensions are slightly higher than Social Security, and below the national average for public sector pension benefits.  Rather, Illinois fails to collect taxes in proportion to its population.

Until all businesses pay their share of taxes, there will always be a need for public sector employees to bargain for their portion of the state’s diminished income.  Otherwise, unchecked, corporations will only serve the needs of their shareholders, while ignoring the infrastructural, educational, medical, and sociological needs of the public.

Look no further than the Mitsubishi plant in Bloomington, Illinois, to find a corporation that lived its entire life on Illinois tax wavers and was offered generous new subsidies in 2014, yet still moved their plant to Thailand.  This is not a facility invested in the needs of the greater public which sustained it for many years.

ESEA Reathorization – The Elementary and Secondary Education Act (ESEA) was originally passed in 1965 to help assure an equal opportunity to a quality education. It has undergone several reathorizations over the years, the most notable of which was the 2001 “No Child Left Behind Act.” There are currently 2 competing versions on how to reathorize the current law.

Please check out Homeroom, the official blog of the U.S. Department of Education for the most up to date information on the ESEA.

After adjusting for inflation (using the Employment Cost Index) and population growth, the FY2013 General Fund budget was approximately 22% less than the budget in FY2000. In FY2012, human services were cut $454 million, and EC-12 education was cut $286 million, despite already being one of the lowest funding states in the Unites States. Similar cuts have become typical over the last 13 years.

If Illinois used Iowa’s tax structure, the state would pull in an additional $6.3 billion in revenue every year. This FAQ illustrates further comparisons with our neighboring states, and should be seen by every tax payer in Illinois!

Progressive Tax Calculator: This Excel spreadsheet allows you to enter your taxable income. It then calculates your federal tax, current Illinois income tax, Illinois income tax after 1/1/15, and your progressive tax due, if passed. This spreadsheet was updated April 13, 2014, to reflect Harmon’s recent tax proposal and to accomodate household exemptions.

Cutting Benefits Won’t Fix State’s Pension Crisis
If you want to believe that “unaffordable” pension benefits promised to public-sector workers in Illinois like teachers and social workers caused the state’s outsized, $83 billion unfunded pension liability, stop reading now. This column will only make your head hurt by disproving that canard with facts. If instead you’d rather understand both the true cause of that underfunding and how it actually strains the state’s budget, then by all means continue reading.