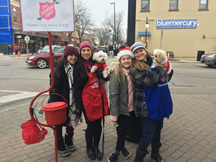 The weather was warm for our bell ringers and musicians, as passers-by continued to donate freely to the Salvation Army.  Nary a dry eye stood on the corner while the musicians performed a beautiful rendition of Silent Night to all who could hear.  Thank you, NUEA!

The NUEA scholarships were created by certified staff in District 203 to recognize outstanding contributions among area high school seniors.  The scholarships are funded by member dues and represent a small portion of the local support NUEA provides the community through scholarships, volunteerism, and charitable giving.

Philip Dohm will be attending the University of Illinois at Urbana-Champaign this fall as an Actuarial Science major.  While at Wheaton North High School, Philip was heavily involved in soccer, eventually serving as team captain and a member of the Falcon Athletic Leadership Council.  He also served as referee for club and park district soccer events.  His athletic contributions were balanced by his participation in academic clubs such as the Math Team, Chess Club, National Honor Society, French Honor Society, and Math Honor Society.

Philip remarked that his teachers and coaches at Wheaton North helped him become more flexible, more punctual, and more prepared for college life.  He added that many of today’s students seem to feel entitled to respect, recognition, and awards.  This attitude is detrimental to his generation because when students feel entitled, they make little effort to earn the skills and knowledge they need to advance the community as a whole.

Maddison Paladino will be attending Oberlin College in Ohio, where she will major in Biochemistry and play softball as a Yeowoman.  Maddison has been active at Downers Grove South as an athlete, leader, and a volunteer.  She played softball all four years, eventually serving on the Student Athlete Academic Leadership Team and the Athletes Committed to Excellence Club.  She exemplified leadership by serving on the Student Council for four years, the Key Club for four years, and she served as a class leader in PE her junior and senior year.  As a senior, she became a member of the Earth Action Club and the Google Innovative Incubator Club.  She was recognized for her hard work through inductions into the National Honor Society and Spanish National Honors Society.

Despite her extensive involvement at Downers Grove South High School, Maddison stated that her most impactful activity was her service on the Downers Grove Township Peer Jury.  The jury was tasked with assigning consequences to students who were arrested for misdemeanor offences.  Maddison felt that the program was a powerful and rewarding avenue to help students learn from their mistakes without leaving a permanent record.  Maddison commented, “Consequently, I do not judge people by their actions, but how they respond to the consequences of their actions.”

This fall, Whitney Smith will be attending Illinois State University with a major in biology and zoology.  Whitney’s achievements reflect a heartfelt belief in the value of faith, volunteerism, and collaboration.  She has been active volunteer in her youth group at The Sanctuary Church, serving on the Student Leadership Team and assisting at Feed My Starving Children, the Bolingbrook Food Pantry, and the Bolingbrook Christian Health Center.  She has also participated as a volunteer and lifeguard at the Timber-Lee Ministries Summer Camp in East Troy, Wisconsin.  At Naperville North High School, she participated on the girl’s Swim and Dive Team for all four years, assisted with boy’s dive team meets, and advanced to team captain her senior year.  She also was a PE class leader and she served as a K9 mentor for her peers at Naperville North.

Whitney is appreciative of her experience at Naperville North.  She commented that her teachers helped her grow her ability to collaborate with a diverse group of people and her ability to become a self-directed learner.  She stated, “Naperville North High School has prepared me for future challenges by affording me the opportunities to work with many diverse peoples by incorporating social interactions in the execution of this semester’s curriculum.”  She also cited the Freshman Learning Initiative program as a particularly strong influence toward helping her develop independent learning strategies and problem solving skills.

Helping the Naperville Kiwanis – NUEA members helped at the Kiwanis Pancake Breakfast, held on March 18.  For pictures of the event, please login to NUEA Connect.  Congratulations, NEA, for making a difference!

NUEA Helps Salvation Army 2016 – On December 23, volunteers from NUEA participated in the 2017 Red Kettle Campaign by ringing the bell on the corner of Main and Jefferson.  NUEA members Cari Chidley, Deb Mitchler, and Christine Bell were join 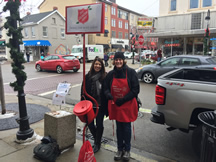 ed by musicians from Madison Jr. High.  Even a slight mix of rain and snow didn’t slow down our bell ringers and musicians, as passers-by continued to donate freely to the Salvation Army.  Nary a dry eye stood on the corner while the musicians performed a beautiful rendition of Silent Night to all who could hear.  Thank you, NUEA!

The NUEA scholarships were created by members to recognize outstanding contributions among area high school seniors.  The scholarships are funded by member dues and represent a small portion of the local support NUEA provides the community through scholarships and charitable giving.

Emily Forsythe will be attending the University of Alabama in the fall as a biology major.  She eventually wishes to enter the field of medicine.  Emily has been an active athlete on several area teams, including Metea Valley girl’s basketball, Chief rugby, and the Strikers Fox Valley Premier Soccer Club.  She volunteered in the Peer Partners program, Principal’s advisory board, Student Athletic Leadership Team, and the Yearbook Committee while at Metea Valley.  She has also dedicated time to Special Olympics, Feed my Starving Children, and the Hesed House Community Service Project, in addition to her work as a religious education volunteer in her church at St. Thomas the Apostle.  Emily’s mother is an academic support teacher and her step-father is a science teacher.  Both parents work at Madison Junior High School.

Kurt Simpson will be attending Indiana University as an education major this fall.  While at Neuqua Valley, Kurt was a member of the football team and the baseball team.  He was a P.E. peer partner and a Project Unify volunteer.  He has supported students with special needs through his work with the Capernaum Camp, Special Olympics, and the Best Buddies Program, for which he served on the board his senior year.  He has also donated time to Safety Town, Rebuilding Aurora, and the organizing team for the Tom Schlegel 5k Run.  Kurt’s mother teaches Kindergarten at Beebe Elementary School.

Ashlyn Bell will be attending Indiana University Purdue University Indianapolis(IUPUI).  She is planning on double majoring in marketing and international business with a minor in Spanish.  Ashlyn is the President of Central’s chapter of DECA, a member of Art Club, and a member of the National Honor Society.  She served as a captain of the Cheerleader squad sophomore and junior years.  She has also volunteered her time to Feed My Starving Children, the Naperville Humane Society, the Epilepsy Foundation, Naperbridge, and Special Olympics.  Ashlyn’s mother teaches Career/Technical Education at Naperville Central High School.

The NUEA is the association of 1400 certified staff members who work in Naperville School District 203.  They are a unified voice advocating for students and the teaching profession.  Led by President Mark Bailey, they work with the community, administration, students, and parents in District 203 to help provide the best educational experience possible to residents of Naperville, Bolingbrook, and Lisle with District 203.

NEA Foundation Awards Grant to Naperville Teacher – The National Education Association Foundation announced on January 15, 2016, that Madison and Maplebrook teacher David Carroll was the recipient of a national Learning and Leadership Grant.  The grant, in the amount of $2000, will be used to help fund Carroll’s study investigating the relationship between music literacy and text literacy.  In particular, the money will be used to offset the costs of instruments, materials, and facilities related to the study.  The study is based on the premise that sharing literacy strategies between music and text strengthens both by providing additional contexts in which to apply them.

Five NUEA Members Earn IEA SCORE Grants – The Naperville Unit Education Association has announced that five District 203 teachers have earned service-oriented grants from the Illinois Education Association (IEA) for their schools.  The grants are part of a new grant program available to educators who are in the first 10 years of their careers.

SCORE, Schools and Community Outreach by Educators, will award as many as 100 grants across Illinois in amounts up to $1,000 to allow early career educators a chance to build service-oriented programs in their schools or their communities. Grants for more than $1,000 may also be considered.  These grants are designed to allow educators to find ways to address unmet needs and fund helpful programs to solve them.  From after-school tutoring programs to school improvement projects, from reading programs to partnerships with community organizations, the possibilities are limitless.